Posted By PVA Admin on March 1, 2018
Share This Article

During Women’s History Month, Paralyzed Veterans of America (PVA) will be recognizing women members whose notable achievements helped to advance the organization’s mission. This week, we are featuring PVA member and disability advocate, Laura Ellington. 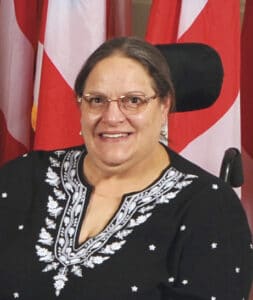 Laura M. Ellington of Fairmont, WV, was elected as the first woman National Vice President of PVA in 2009. As Vice President, Ellington held the most senior leadership position of the organization’s Executive Committee. When voted into office, Ellington was serving as National Director for the West Virginia chapter.

Forward-focused and mission-driven, Ellington accepted the nomination with a plan to help women with disabilities and all paralyzed veterans receive the support they needed to achieve their goals.

“…the issues facing women veterans with disabilities can sometimes be overlooked in the larger scheme of things.’

“I am humbled and honored to be elected vice president. Areas I hope to focus on are our members’ health care, as well as the issues facing women veterans with disabilities that can sometimes be overlooked in the larger scheme of things. My goal is to help empower as many veterans as possible with the tools they need to lead full lives and to give back to all veterans, especially our members,” Ellington said.

Ellington served in the U.S. Air Force from 1982 through 2001. Tours of duty include Suwan, S. Korea; Lackland AFB, TX; Brooks AFB, TX; Bitburg AB, Germany; Saudi Arabia, Kuwait; McClellan AFB, CA; and RAF Alconbury, England. Her career field during that time was public health. Upon retiring with the rank of SSgt, she returned to school at West Virginia University, finishing her bachelor’s degree, and continued to obtain her master of science degree in rehabilitation counseling (2006). Not one to sit still for long, she then pursued a two-year degree program in American sign language interpreting, graduating in 2008.

Ellington is married to John A. Ellington, CMSGT (Ret.), with whom they share 11 children and 22 grandchildren. They currently reside in West Virginia and enjoy volunteering with and for veterans. Ellington has worked as the hospital liaison and sports representative, as well as serving on the Paralyzed Veterans’ Board of Directors, for the chapter. In addition, she works with other veterans groups, sharing information about Paralyzed Veterans and bringing back to her chapter news of local veterans events and important issues.

Ellington plans to work with Paralyzed Veterans for many years to come and make a difference for veterans with spinal cord injury who don’t know what their potential can be. Her focus will not be on disabilities, but capabilities and putting those to good practice for our members as well as communities.