Almost 600 athletes packed downtown Louisville on July 11-16 to participate in the 39th annual National Veterans Wheelchair Games. From the Kentucky International Convention Center to Churchill Downs, and many other host locations, veteran athletes made their spirit and pride known, and the city of Louisville was abuzz.

Each year, the Wheelchair Games are co-presented by Paralyzed Veterans of America and the Department of Veterans Affairs. The event is open to U.S. military veterans who use wheelchairs for sports competition due to spinal cord injuries, amputations or certain neurological problems, and who receive care at VA medical facilities or military treatment centers. This year’s Games hosts were the Kentucky-Indiana Chapter of PVA and the Robley Rex VA Medical Center.

Staff members from PVA’s national office, the Kentucky-Indiana Chapter of PVA, the VA, along with over 2,400 volunteers, worked throughout the week to ensure all attendees had a wonderful time at the Wheelchair Games. Since Louisville is home to the Wall Street of bourbon, this surely wasn’t a problem. Humans weren’t the only ones that brought joy to people at the Games. Many athletes brought their adorable service dogs for comfort and support, and that made each day at the Games even brighter. 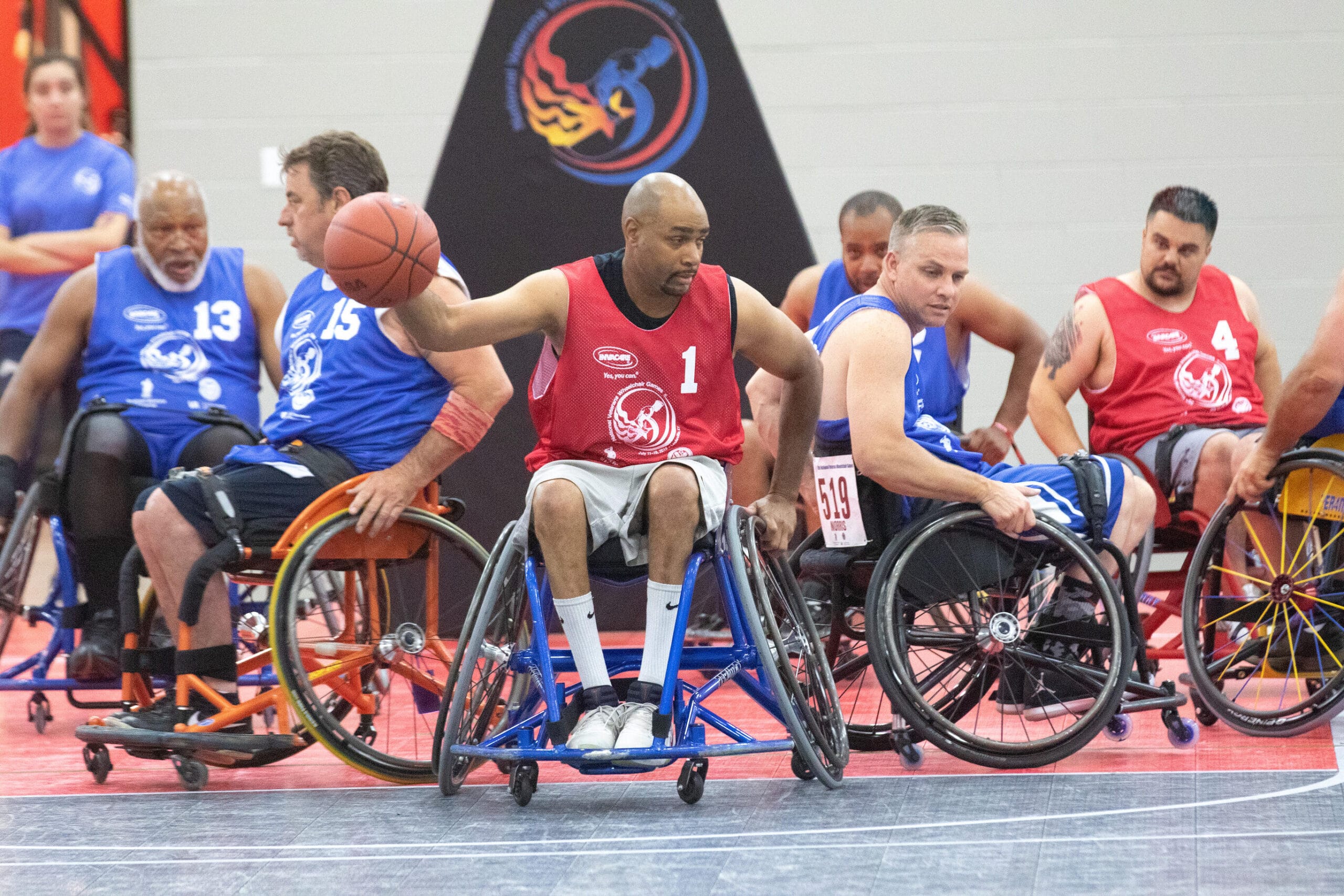 Veterans from across the U.S., Puerto Rico and Great Britain competed in 20 sporting events, including wheelchair basketball, rugby, softball and more. Nearly all states were represented at the Games, and athletes proudly waved their state, territory or country flag during the Opening Ceremony. Note to U.S. and Great Britain athletes – all of you showed much enthusiasm, but you need to step up your game because athletes from Puerto Rico sure know how to party!

Athletes were thrilled when Golf legend Fuzzy Zoeller stopped by the Quail Chase Golf Course to speak with them and check out the competition. Zoeller was blown away by what the athletes accomplished on the course using adaptive mobility devices. “You stand back and watch, it’s amazing what they can do,” Zoeller said. He surely wasn’t alone in his sentiment. In case you’re wondering, Fuzzy is his nickname. And what would the Games have been without an appearance by one of the greatest NBA players of all time? Shaquille O’Neal, or simply “Shaq” to his legion of fans, made a surprise visit that got attendees elated.

One of the most important events at the Wheelchair Games is Kids Day, and this year was no exception. Kids Day hosted children in the Louisville area with physical disabilities and they were paired with veteran athlete mentors. Under the mentors’ guidance, the kids enjoyed learning about and participating in adaptive sports such as softball and slalom. Rory, a young girl who uses prosthetics, said “doing the obstacle course” was her favorite thing about the day. Each child was presented with a gold medal at the end of the Kids Day event, and had their face painted and ate pizza. All of the kids had a blast with their mentors. Of course, what kid doesn’t have loads of fun with athletes, face paint, and pizza?

The Super “G” – Spartan edition at this year’s Games was showcased at the crowded Fourth Street Live! in downtown Louisville. This event is an extreme obstacle course that featured the top 8 veteran athletes who made it to the finals of the wheelchair slalom competition. The Super “G” is a test of agility, strength, skill and speed. All of these attributes were on full display by the competitors, in particular, U.S. Marine Corps veteran Tim Conner, who won the gold medal in this event for a second time. You know you’ve made it big when ESPN SportsCenter Top 10 Plays features you in their highlights.

The Closing Celebration wrapped up an exciting Games filled with triumphs and comradery among athletes. U.S. Army veteran Twila Adams was announced as the 2019 Spirit of the Games Award winner. Since 1987, the Spirit of the Games Award has been given to a participant in the Wheelchair Games who best exemplifies athletic excellence, sportsmanship, and good character. “These Games changed my life. Never been an athlete, not even in high school. But now I’m an athlete because of the National Veterans Wheelchair Games,” said Adams.

The passing of the torch at the end of the Closing Celebration officially kicked-off the countdown until the 40th anniversary of the Wheelchair Games in Portland, Oregon on July 3-8, 2019.

Legends will be made. Are you ready?