Posted By PVA Admin on October 1, 2019
Share This Article

On Tuesday September 24th, PVA held its annual Gala, where we celebrated organizations, businesses, and individuals that lead efforts and champion the rights of veterans and all people living with disabilities. It was an amazing night as we honored our members and bestowed awards to those who have assisted us in our mission to help paralyzed veterans and others with disabilities live their lives with dignity and independence, free from barriers.

The 2019 Gordon H. Mansfield Congressional Leadership Award honoree is Senator Tammy Duckworth from Illinois, recognized for her work in making air travel safer and more convenient for passengers with disabilities. She led congressional efforts to ensure the Department of Transportation implement its wheelchair damage reporting requirement for domestic airlines, and was an original co-sponsor of the Air Carrier Access Amendments Act (S. 1318), which would increase access for people with disabilities in air travel and improve enforcement. The Gordon H. Mansfield Congressional Leadership Award is named after the Honorable Gordon Mansfield, former acting secretary of the Department of Veterans Affairs and executive director of Paralyzed Veterans of America. Mansfield was a combat-injured Vietnam War veteran who was awarded the Distinguished Service Cross.

The 2019 PVA Disability Civil Rights Award honoree is The Walt Disney Company, recognized for the many ways their disabilities services department has made it possible for those with physical and cognitive disabilities to have a safe and enjoyable visit to the Disney Parks. Access service, lifts, ramps, wheelchair-friendly room modifications, and handheld assistive listening devices ensure that everyone is able to enjoy a great vacation and maximize the independence of our members. The award was accepted by Col. Kevin Preston, U.S. Army (Ret),of Disney Veteran Programs.

The 2019 PVA Social Progress Award honoree is Harris Rosen, President & COO of Rosen Hotels & Resorts and U.S. Army veteran, recognized for the ways he has given veterans dignity and support by leveraging his influence and resources. Rosen offers veterans valuable discounts at his properties, supports employment initiatives, hosts PVA events, and has designed his properties with accessibility in mind, allowing our veterans and caregivers the ability to enjoy comfortable, hassle-free stays at his hotels and resorts.

The 2019 PVA Employment Award honoree is Agility Defense & Government Services, recognized for generously donating their time and resources over the last 12 years to host the Paralyzed Veterans Golf Open, which raises funds for PVA’s Paving Access for Veterans Employment (PAVE) program. Agility donates 100% of their proceeds to PVA, which has resulted in over $4.5 million going directly to PVA to help thousands in the veteran community find meaningful employment. The award was accepted by Maj. Gen. Dan Mongeon, U.S. Army (Ret), President & CEO of Agility Defense & Government Services.

We thank everyone who is just as passionate as we are about giving veterans the benefits, jobs, and accessibility they deserve! To relive all of the greatest moments of this year’s PVA Gala – be sure to visit us on Flickr! 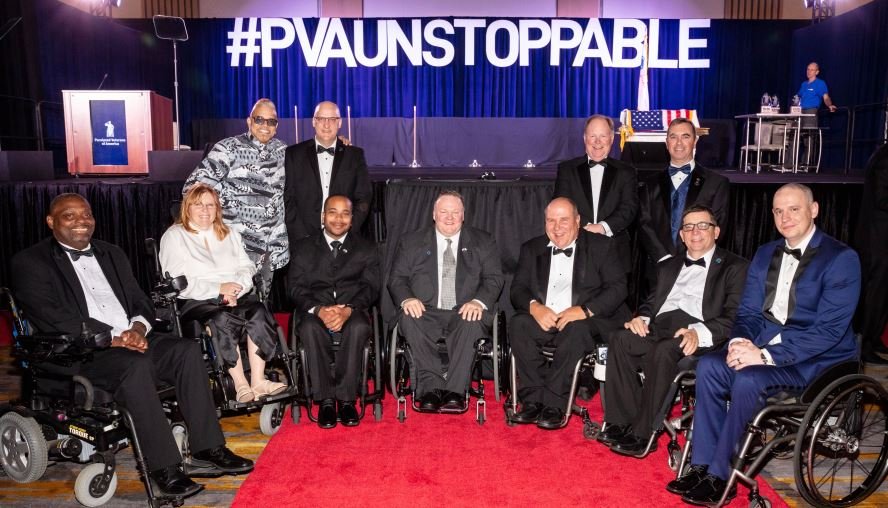