Posted By PVA Admin on August 16, 2019
Share This Article

A German soldier in WWII wrote in his journal, “American parachutists…devils in baggy pants…are less than a hundred meters from my outpost. I can’t sleep at night; they pop up from nowhere and we never know how or when they will strike next. Seems like the black-hearted devils are everywhere…”

Today on National Airborne Day we give our admiration to this critical and elite group of men and women trained to parachute into combat anytime and anywhere, often with very little notice – and based on the above journal entry, clearly capable of striking fear into the hearts of the enemy.

79 years ago today in 1940, 48 Army volunteers executed the first parachute jump, paving the way for a specialized group of forces who fly, glide, and parachute their way into areas that may be unreachable by other modes of transport. It opened up a strategic new way of doing battle.

Our Executive Director Carl Blake is one such soldier, a veteran of the 504th Parachute Infantry Regiment (Devils in Baggy Pants) of the 82nd Airborne, who sustained a spinal cord injury while participating in a training exercise. Carl calls National Airborne Day one of his “favorite days of the year,” and we are honored to have his leadership, helping PVA provide other veterans with disabilities lead active and fulfilling lives. 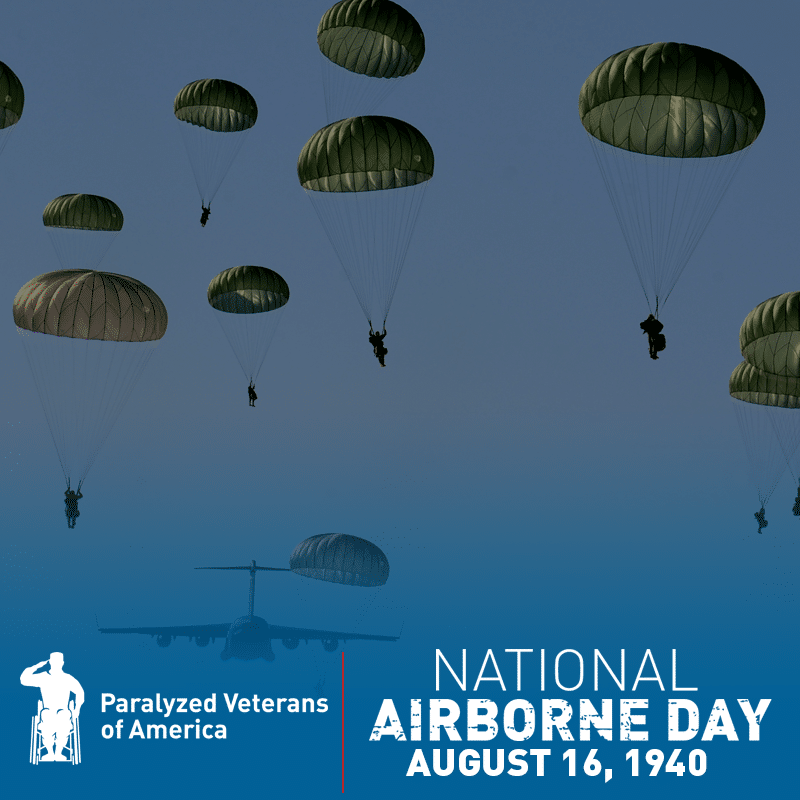 Do you think you could you earn your jump wings? If the danger and excitement of jumping out of an airplane loaded down with combat gear into enemy territory calls you, you would have to pass the stringent Army Physical Fitness Test standards, which means doing at least 42 push-ups, 53 sit-ups, and running two miles in at least 15:54.

In addition, you’d have to complete the Flexed Arm Hang, an exercise in which you pull up on a bar until it is level with your name plate, and then hang there for 20 seconds.

Many can’t make it through the physical requirements, and 10% won’t make the cut after Jump Week. But still, 24,000 men and women graduate annually and earn this prestigious designation. They’re drawn to the legacy but also the rush: huddled together in a loud, roaring airplane and then falling out of the sky in total silence, alone with only a parachute and a mission.

Airborne troops typically descend 14-18 feet per second, which is about 10 miles per hour. After an average jump time of one minute, they reach the ground or the water, where they may support ground forces, secure assets, conduct humanitarian assistance, and distribute supplies.

If you have ever felt the chills seeing soldiers fall from an aircraft you know how awe-inspiring it is, and how beautiful and yet terrifying it must be for those strong enough and physically fit enough to do it.

PVA wishes a Happy National Airborne Day to all these brave men and women. Thank you for your service!