Posted By PVA Admin on March 9, 2018
Share This Article 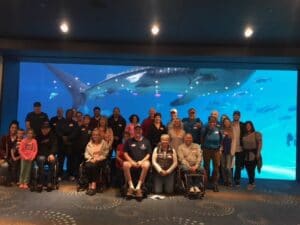 It’s Sunday, a day of rest and relaxation and maybe time to work on that honey-do-list that seems to be getting longer by the minute. Except, this Sunday is not like any other. This particular Sunday, LifeWaters and the Paralyzed Veterans of America (Paralyzed Veterans) have come together to bring a group of Veterans to the Atlanta aquarium to participate in the Veterans Immersion Program. It’s an opportunity to dive and snorkel with all kinds of sea life, and share the water with three 18-30 ft. whale sharks in a 6.3 million gallon salt water “fish tank.”

To make this experience a success, LifeWaters brings in their team of dedicated and selfless volunteers. These men and women from all over the country have been trained and certified to provide support for the event as “dive buddies.” They will accompany the veterans, guiding them as they scuba dive or snorkel in the aquarium. The services that the volunteers provide are essential to the experience of the participants and the LifeWaters team does an exceptional job in ensuring that each veteran’s needs are met. The interaction that takes place between the veterans and the volunteer team is akin to what you would find in a close-knit family. They share stories, laugh and smile, and genuinely care for one another. The atmosphere they create is contagious and the camaraderie amongst the veterans and volunteers is ever so present in their conversations.

The veterans, like the volunteers, hail from different parts of the country and have been brought together by their interest in recreational scuba, and their curiosity and desire to be in the water with the ocean’s “gentle giants.” Some have driven up to eight hours to participate, while others live in the state but didn’t have a reason to venture out into the “big city,” as Marine veteran and Paralyzed Veterans’ member Dennis Walters jokingly says. The opportunity to participate in this event is not lost on Dennis, who is a paraplegic and requires the use of a wheelchair for his daily routines. As he explains, the impact that sports and recreation can have on veterans rehabilitating from catastrophic and life altering injuries can be life-changing. Mr. Walters credits opportunities like the sports and recreation programs offered by the Paralyzed Veterans for helping him get out of a “dark place,” as he puts it, and continue living a healthy and active lifestyle.

It’s a process that many veterans living with disabilities go through as they learn to adapt to their new normal, and it can be a difficult adjustment for family members as well. Bridget Fretz the mother of Austin Fretz, an Army veteran who served multiple tours in Iraq, understands this difficult transition well. Austin was injured in 2011 as a result of an improvised explosive device that exploded as the Humvee he was riding in passed over it. As a result of the explosion, Austin suffered a traumatic brain injury and he now requires daily care; his mother is his full-time caregiver. Prior to Austin’s injury, he was a certified diver, an activity that he very much enjoyed. The trip to the Atlanta aquarium was the first time since being injured that Austin would be getting back into the water.

The thought of her son going in the water created a lot of anxiety for Ms. Fretz. As his caregiver, she monitors everything that Austin does, and she was unsure how he would react to an experience that was familiar, but foreign at the same time. As she watched her son smile excitedly and step forward onto the platform to sit and dangle his feet in the water, she decided that she too would enjoy the moment. Austin reached for his mask, placed it over his face, and in one swift motion, plunged into the water and into the arms of his volunteer “buddy” Keith, who would guide him on his expedition. For the next 30 minutes, Austin and his mother, who went diving with them, immersed themselves in the water, a safe space for both to unplug from the daily rituals of their lives. When the experience was over, Austin’s mother was relieved and at ease. Her smile was just as big as Austin’s.

“It was good to see Austin happy, and see something positive come out of this amidst tragedy. I think it’s the best thing that’s ever happened.”

“It was awesome. It was good to see Austin happy, and see something positive come out of this amidst tragedy. I think it’s the best thing that’s ever happened.” They are looking forward to repeating the experience in the future. “He’s ready to come back and do it again with Keith as his buddy.” For now, Austin will have lots of memories to take home and share with his friends.

Austin and his mother were not the only team that came out to participate in the activities. They were joined by Army veteran Greg Roeder and his two-year old Labrador Retriever, Hunter, his Post-Traumatic Stress Disorder (PTSD) support partner. Hunter is a service animal who is highly trained to analyze and help de-escalate stressful situations for his owner. Unfortunately, Hunter was not allowed to go into the water but that was perfectly fine with him. Hunter is one Lab that has absolutely no interest in swimming. His owner, on the other hand, couldn’t wait to get in the water and snorkel with the various forms of life in the aquarium. Hunter watched intently from afar as Greg placed his mask over his face and submerged himself in the tank. It was a long thirty minutes for Hunter, but for Greg, it was barely enough time. Greeted by dog kisses and tail wags when he returned, Greg was grinning from ear to ear. Asked to summarize his experience, he answered in one word: “awesome!”

On any other day, the whale sharks get all of the attention at the aquarium. Rightfully so, as they are the largest fish in the sea and in the aquarium. But on this Sunday, their spotlight was a little dimmer as the focus turned to the individuals in wheelchairs, the patient service dog waiting for his owner, and the mother and son duo. Today they each wrote another chapter in their own stories, which are as spectacular and intriguing as the main attraction in the aquarium.