Posted By PVA Admin on February 16, 2018
Share This Article 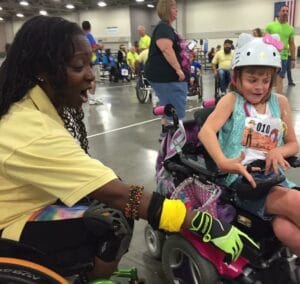 Celebrating Black History month isn’t limited to 28-days for U.S. Army veteran Twila Adams. The 56-year-old’s pride of heritage is only second to her pride of service.

Adams, a native of Charlotte, N.C., grew up surrounded by small-town people who took life slow. The oldest of two sisters, she spent her childhood playing outdoors, knowing her neighbors and eating good food. But, what she’s most grateful for is the guidance she received from her mother and father who always taught the principle of giving, compassion and respect of others.

“Mom and Dad are my number one role models,” says Adams. “One of the many things they taught me is to always maintain a can-do attitude about whatever obstacle lay before me.”

In 1980, Adams put that “can-do” philosophy to use when she enlisted in the United States Army. She completed basic training at Fort Jackson and proudly served as a transportation management coordinator for 11 years, reaching the rank of sergeant.

Her duties took her to places like South Korea, Turkey and Iraq where she was deployed during the first Gulf War.

“Completing basic training required a lot of determination every single day,” says Adams. “I had to dig deeper than I ever had to dig before, but I made it. It was an accomplishment. It was a pivotal point that quickly made me realize there’s nothing that can stop me but me.”

Everything she was ever taught about perseverance, duty and commitment was about to be put to the ultimate test when, on November 5, 1994, an automobile accident resulted in a C-4/5 spinal-cord injury.

“The military trained me to utilize the never-quit-attitude,” says Adams. “I learned to work with what I had to transform and reinvent my life. The military added to the skills, morals and discipline I learned from my parents and taught me to be a good leader.”

Adams realized she’d once again have to dig deep into her never-quit-attitude to reinvent the life she once had. Fortunately, she discovered Paralyzed Veterans of America (PVA) and the National Veterans Wheelchair Games (NVWG).

“I’m very grateful to the recreational therapist who introduced me to the NVWG and PVA,” says Adams. “The games inspired me to want more from my new life which gave me the courage to seek out other opportunities and become more active at home.”

Adams went to her first NVWG in 2002, competing in nine-ball, trap shooting, table tennis and bowling. She has since become a Kids Day Ambassador and offers her experience to newly injured veterans who are going down a road she’s traveled.

“Before my injury I was truly not an athlete and didn’t even like tennis,” says Adams. “Today, I’m competing in wheelchair tennis, air rifles, air pistols, javelin, shot put, discus, kayaking, hand cycling, curling and even weightlifting. I can’t go anywhere without speaking about PVA.”

For Adams, the biggest obstacle to overcome post-injury wasn’t the injury but making people understand that her injury didn’t define who she had become.

“That’s a daily struggle for me,” says Adams. “I started from a mental perspective of retraining my mind into seeing things in a different way and turning off the naysayers who were telling me, ‘well yes you can, but it’s not going to be the same.’ But if you stay focused and stay true to the mission, eventually you will accomplish your goals.”

For Adams, honoring black history isn’t something that’s acknowledged for only a day or a month but something she celebrates all year long. And though she’s seen her share of racism and sexism, like her injury, those things simply don’t define her.

“I’ve experienced it all,” says Adams. “I’m just a little black female who wants to live life to the fullest. But the outcome and the goal aren’t what someone does to me but how I respond to it or how I want to use those experiences to make my life and others lives fuller.”

Dr. Martin Luther King once said, “I will hate no man, for I will give no man that power over me.”

For Adams, it’s a philosophy worth living.