Posted By PVA Admin on February 16, 2018
Share This Article

As a single mother, U.S. Navy veteran and Paralyzed Veterans of America member, Sharona Young aspires to be the best mother and role model she can be. Her daughter, Taylor, has been a huge motivation for her over the years. At the age of 12, Taylor has already shown interest in computer science and technology. Sharona took this opportunity to go back to school to learn computer programming and web development at the University of Central Florida where she hopes to teach her daughter the knowledge she obtains and help her get ahead of the game. 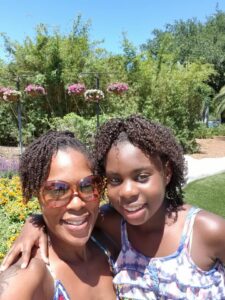 “My primary goal is to be able to just teach [Taylor] and show her some things so that she can start taking advantage of learning different programs and different stuff while she’s young,” says Sharona.

On top of the education she is currently getting, Sharona has completed her associates degree in radiologic technology, obtained her Florida basic x-ray license and has completed her Bachelor of Science in management.

Sharona joined the Navy at the age of 17 with eagerness to travel the world. During her service, she traveled to many different places such as parts of Europe, the Mediterranean Sea, Puerto Rico and various parts of the U.S. Sharona was able to serve for 14 years before she had to medically retire after getting diagnosed with multiple sclerosis (MS) in 2013. Leading up to her diagnosis, she was having problems in her left leg and foot that she couldn’t explain. For a while, doctors didn’t understand what was happening because she had no history of trauma or any previous pains.

“It was rough,” Sharona says. “I would think ‘is it really hurting, or is it all just in my head?’ So, it was scary at first because I wasn’t familiar with MS.”

After she retired from the Navy as chief petty officer in June 2014, Sharona went through a period of depression. Trying to come to terms with her diagnosis was tough, but with the help of her daughter she was able to pull through.

“I’m a single parent, so I had to remind myself that life wasn’t over, and I still had a kid to take care of”

“I’m a single parent, so I had to remind myself that life wasn’t over, and I still had a kid to take care of,” Sharona says. Raising Taylor since her diagnosis has had its ups and downs. Her life changed completely. While she doesn’t rely on a wheelchair, she does use her chair most of the time. Her fatigue and weakness have been a constant struggle for her, as well as facing some cognitive issues.

“I have my good days and bad days,” she says. “For her [Taylor], I think it gets tough because sometimes she wants to do things and I’m just not feeling well or I’m not able to, so I think that can be frustrating and disheartening to her.”

Sharona has found happiness in adaptive sports. She has competed in two National Veterans Wheelchair Games (NVWG) where she competed in a number of sports such as handcycling, bowling, table tennis, 9-ball and boccia ball.

“They are really fun,” Sharona says about the NVWG. “It’s pretty cool being able to see people from all different areas, different ages, different branches and a wide range of disabilities out having a good time pushing themselves and participating in the sports. That’s always nice to see.”

Most recently she competed in the 2017 Invictus Games in Toronto. At the Invictus Games, Sharona competed in bowling and handcycling. By her surprise, she earned a medal while in Toronto. Sharona went home with a bronze medal in hand cycling, her first ever medal. She stays active not only in sports but with school and community activities as well.

As Black History Month is celebrated this month, Sharona and her daughter get as involved in their community as they can.

“We celebrate Black History Month all year long, but during the month of February we try to support any community events that we are able to attend,” she says. “We take the time to be appreciative and take a look at the history and accomplishment that African-Americans have contributed to and done throughout not just history, but even in our lifetime, and things that I can look at and get a true appreciation for because I’ve been able to see them happen.”

While Sharona has faced discrimination in her lifetime, she looks past it and always remembers to be proud of where she came from and teaches her daughter to love herself and never to be ashamed of her heritage.

With an enormous number of African-Americans to look up to, Sharona points out two specific people, one being former U.S. President, Barak Obama.

“I really admire the accomplishments that Obama has made,” she says. “Not just from being the president and not just the political standpoint, but the things that he has been able to accomplish in his lifetime as an African-American and facing a lot of resistance and things he’s had to build throughout his lifetime and to accomplish everything that he has done.”

She also has tremendous admiration for the late poet, Maya Angelou, on how she overcame a great deal of adversity throughout her lifetime.

As Sharona faces MS and raising her daughter, she is prepared to overcome any adversity and hardships that come her way.