Posted By PVA Admin on February 6, 2018
Share This Article

February is Black History Month, an annual celebration of achievements by African Americans and a time for recognizing the central role of blacks in U.S. history. Paralyzed Veterans will be recognizing Black History month with a series of weekly stories. These stories will highlight the struggles, successes and achievements of our black members and their involvement in the organization’s history. 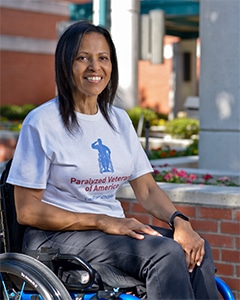 Growing up, Karla Cole Clay was more involved in music and performing arts than sports. Valedictorian of her high school class of 1978, Karla attended Christian Brothers College (now University) in her hometown of Memphis, Tennessee, on an Air Force ROTC scholarship.

“I thought, I’ll give them a commitment of four years and they’ll pay for college. That sounds like a good deal. October 26, 1982 was my first day of active duty. On October 25, 1986 I resigned my commission. I was promoted to Captain a few months earlier—I had actually made Captain early—so people were stunned when I got out, but I fulfilled my commitment like I said I would and then I walked away.

Karla served as commissary officer at McChord Air Force Base in Tacoma, Washington and, later, at Malmstrom Air Force Base in Great Falls, Montana. While at Malmstrom, she assisted the Commander of Air Force Commissary Service on inspections at other commissaries, and was eventually sent on temporary duty to the commissary at Bergstrom Air Force Base in Austin, Texas. Her husband was returning from duty in Korea to begin law school in Austin, which made it the perfect time for temporary duty to be changed into a permanent assignment. Based on improvements she and her team made to the commissary, Karla was selected as Air Force Commissary Service Junior Officer of the Year and promoted to Captain. After leaving the Air Force in 1986, she pursued her marketing career, working in sales management for a number of consumer product companies.

After experiencing periodic symptoms—tingling in her feet, vertigo—for more than a decade, an MRI in 2001 diagnosed Karla with MS. She continued to work another ten years, but stayed “in the closet” about her diagnosis, only telling family and close friends because she was unsure how it would impact her career. As symptoms mounted, she ultimately had to face reality and stop working. Upon learning that she was eligible for care at the VA, she enrolled and was using a wheelchair from the VA when a physical therapist suggested she look into getting a custom wheelchair.

“They even had my favorite color. They give you a brochure and you pick it out like you pick out a car. I just got new wheels with blue spokes, so now I’m really looking sharp.”

A self-proclaimed “wheelchair potato,” Karla was shocked when people suggested she participate in the National Veterans Wheelchair Games in Dallas. Hesitant at first, she eventually signed up for racing, javelin and bowling, and became hooked on adaptive sports, particularly strength training.

“I began strength training with the VA kinesiology therapist and quickly realized that I like to challenge myself and lift more or do more sets and improve each time I go. I’ve lost weight and toned up. Two years ago, at the age of 55, my transformation from non-athlete to NVWG medalist began several months before the Games in Dallas. Each week I did two hours of strength training with a VA kinesiology therapist and two hours of track and field practice with two VA recreation therapists. I was stunned when I noticed muscles two months later—biceps and triceps I hadn’t seen before. I keep teasing friends that I’m going to walk around in sleeveless shirts even in the winter because I really do like the way my arms look now!”

She gives a lot of the credit for her success to the team at the Dallas VA SCI (Spinal Cord Injury) clinic.

“I couldn’t have competed without the coordinated efforts of the outstanding Dallas VA SCI clinic team. The physiatrist who did my first NVWG physical sent me to a kinesiology therapist for strength training, and two recreation therapists taught me how to play boccia and throw the discus and javelin. Also, a physical therapist and an occupational therapist worked together to equip my chair with additional support devices for racing.”

Getting involved in the Games got Karla more involved in Paralyzed Veterans of America (Paralyzed Veterans, PVA). She now volunteers at the SCI Internet Cafe at the Dallas VA, volunteering as a host and helping guests use the computers. She was able to try out adaptive rowing through a partnership between Paralyzed Veterans and Dallas United Crew and participated in Walk MS with the Dallas VA MS support group’s Veteran Strong team that was sponsored by the Lone Star PVA. Up next, she’s looking forward to tackling adaptive rock climbing at the NVWG Expo.

“If you’d told me I’d be doing all these things 10 years ago, I would’ve thought you were crazy. I’d never heard of boccia nor seen a javelin or discus in person. Getting involved with adaptive sports and Paralyzed Veterans changed my life. I’ve come out of my shell and met many great people, reaped the rewards of volunteering, gotten in shape, learned so much—especially about myself—and even have three gold medals, a silver medal and a bronze medal, thanks to the NVWG. The flame was lit in me back in 2015 and I’m going strong!”