Army Veteran Finds Way Back to Life Through Adaptive Sports

Posted By PVA Admin on April 3, 2018
Share This Article 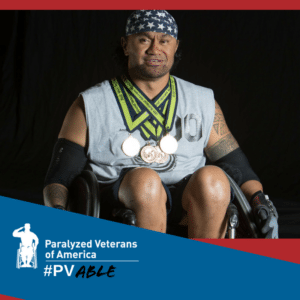 For paralyzed Army Sergeant First Class Sualauvi “Sua” Tuimalealiifano, it was the faces of his three children that pulled him out of his darkest moments of loss and depression – just enough to discover that dreams, goals and ultimately hope might be regained on the surface of a rugby court.

“Depression and anxiety are a whole different kind of evil, and if I’d had the hand function for it, I probably would have taken myself out,” Sua says. “But what pulled me out was the fact that my kids were still young; I didn’t know what their future would be like without me around.”

Born in America Samoa, Sua was six years old when he and his family moved to Kalihi, Hawaii. In June 1997, three weeks after graduating from high school, the rugged, natural-born leader enlisted in the U.S. Army, where he flourished as a paratrooper, jumpmaster and special operations soldier, serving multiple deployments to Iraq and Afghanistan.

But in 2007, Sua was serving with the then-newly formed 96th Civil Affairs Battalion (Airborne) in Southern Afghanistan when enemy fire struck. Sua, wearing roughly 100 pounds of military gear, jumped to the M240B swivel machine gun at the back of the truck, but as the driver took an abrupt turn, Sua was thrown to his back on the ground.

“I heard the snap like a hollow break of dry wood within, inside my ears’

“I heard the snap like a hollow break of dry wood within, inside my ears,” Sua says. “But I was still fighting the war. So many of our supply channels and driving routes had been compromised. We were already short-manned, and often the only reason to send a chopper was for body bags or very severe injuries. I wasn’t about to chance it not knowing what it was. I didn’t see it as a problem, so I kept going.”

For months, Sua endured pain in the back of his neck so severe it “felt like one large needle piercing through it.” Still, he found it in himself to push through the deployment, until one morning in Aug. 2007, when he fell out of bed, his neck hitting the small table at his bedside.

“What happened was my upper half went to get out of bed, and the lower half wouldn’t go with me,” he says. “After my buddies helped me back into bed and I laid there for a few hours, I realized I couldn’t move anything from my waist down.”

Sua was medevaced to Bagram Air Base in Northern Afghanistan, and later to Germany to undergo surgery. After completing months-long rehabilitation at the James A. Haley VA Medical Center in Tampa, he returned home to Ft. Bragg, N.C. In need of more help and assistance from family, he, his wife, Shannon, and their three children moved to Hawaii, to a home that was not modified to meet his needs.

Sua refused to give up. He remained in the Army, first working at Special Operations Command Pacific and later as a counselor helping injured Veterans. But depression set in, and only compounded severely when a 2009 newspaper article left out critical facts about Sua’s combat service and injury.

“It wasn’t the story I told, and I didn’t want to show my face or be anywhere,” he says. “As much as I wanted to stay on active duty, I had all of these people calling me trying to help me out, and I had to set them straight with the story. I felt like I had betrayed my unit, as if I was perceived as having told a different storyline. It only pushed me further into depression.”

For the next six years, Sua determined to stay out of the public eye – and ultimately out of public altogether. With a cervical spinal cord injury that left him a quadriplegic, he believed any chance to get out of the house was too heavy a burden on those he would require for help.

That was until the U.S. Special Operations Command’s (USSOCOM) Care Coalition stepped in, encouraging Sua to fly to Tampa to participate in its adaptive sports program. It was there that he tried quad rugby for the first time, and suddenly, a new way of life began to open before him.

“Sports have given me a sense of purpose, the means to stay fit and goals to keep getting better.’

“Sports have been a complete game-changer for me in terms of living life with this injury,” Sua says. “Sports have given me a sense of purpose, the means to stay fit and goals to keep getting better. Even more, sports have opened up the opportunity for me to be around other veterans with similar injuries. It’s there that we share experiences and passions and discover what else can be done.”

Sua and his family have since moved to Tampa, where he now competes on the Tampa Generals quad rugby team. The retired Sergeant First Class also has competed in rugby, wheelchair racing, shot put and discus at the Warrior Games, Invictus Games and Dixie Games.

On June 27, 2016, thanks to support from Paralyzed Veterans of America, Sua participated in his first-ever National Veterans Wheelchair Games with the same relentless passion and competitive spirit. Sua competed in quad rugby, discus, club, weightlifting and slalom. Throughout the week of the Games, his eagerness to learn and encourage alongside his fellow disabled veterans – whether injured in combat or not, was apparent.

“I was injured in combat, but veterans shouldn’t feel like they had to be in order to play adaptive sports; we don’t owe one person more than another,” he says. “An injury comes with side blinders, which will bring you back into depression if you let it. It requires constant repetition, reminding yourself that there’s hope.”