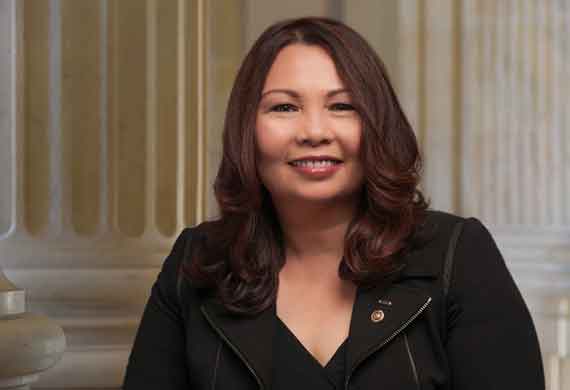 Washington, DC (Sept. 17, 2019) — Paralyzed Veterans of America today announced it will honor Democratic U.S. Senator Tammy Duckworth of Illinois with the 2019 Gordon H. Mansfield Congressional Leadership Award during the organization’s Annual PVA Gala. From critical efforts on the Americans with Disabilities Act, to improving the air travel experience for passengers with disabilities, Senator Duckworth has been a tremendous champion for the civil rights of veterans and all individuals with disabilities.

“Thanks to Senator Duckworth’s outstanding leadership, harmful changes to the ADA were stopped in 2018. She also supported improvements to air travel for people with disabilities through her sponsorship of the Air Carrier Access Amendments Act (S. 669) and the requirement under the FAA Reauthorization Act of 2018 to ensure wheelchair damage reporting from airlines,” said David Zurfluh, national president of Paralyzed Veterans of America. “We’re proud to honor Senator Duckworth with the Gordon H. Mansfield Congressional Leadership Award during our 2019 PVA Gala. The PVA Gala is our night to celebrate victories that have improved quality of life for all veterans and people living with disabilities – and the extraordinary leaders who made it happen. Senator Duckworth represents everything this event is about.”

Established in 2015, PVA’s Gordon H. Mansfield Congressional Leadership Award was first presented to former U.S. Senator Bob Dole to recognize strong leadership and support for veterans’ health care, benefits or disability civil rights. The award is named after the Honorable Gordon Mansfield, a combat-injured Vietnam War veteran who was bestowed the Distinguished Service Cross, and served as a former acting secretary of the Department of Veterans Affairs, and executive director of Paralyzed Veterans of America.

“I’m so grateful to be receiving this honor as we celebrate the strength of the disability community and how far we’ve come,” Duckworth said. “I’ll never take for granted the basic rights guaranteed to me in part due to the efforts of PVA’s founders in the wake of WWII. Whether it’s leading the effort to stop H.R. 620 or making air travel more accessible, I’ll continue working to protect and expand these hard-earned rights so that our nation is fully accessible to all Americans.”

Senator Duckworth will receive the award at the Annual PVA Gala on Tuesday, September 24, 2019 at the MGM National Harbor, just outside of Washington, D.C. Learn more at www.pva.org/gala.