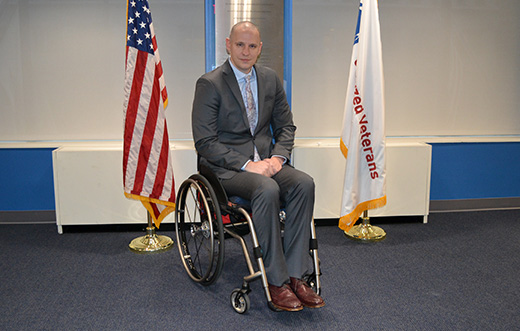 “I’m honored to have this opportunity to take my experience as a Paralyzed Veterans’ member and my knowledge as an advocate and give back to the organization that has made such an impact on the lives of veterans with spinal cord injury or disease,” said Castle. “For more than 70 years, the veterans who have served in leadership roles here have strived to improve their own lives, the lives of their families, the lives of the greater disability community, and the lives of future generations of men and women who wore the uniform and now carry on with life-altering injuries. I am humbled to continue their legacy, and I intend to work side-by-side with the other Paralyzed Veterans leaders to ensure their important work has broader awareness.”

Medically-retired Army Sergeant Shaun Castle is an accomplished college and professional wheelchair basketball player, and outspoken advocate for Paralyzed Veterans of America. Born in Elmira, N.Y., into a strong military family, Castle enlisted in the Army in 2000. A military police officer with the U.S. Army Europe Protective Services stationed in Heidelberg, Germany, Castle served three deployments to Kosovo, Macedonia and Bosnia, and performed missions to the Middle East. In 2002, he served as a protective services officer to two four-star Generals—Gen. Burwell B. Bell III and Gen. Montgomery Cunningham Meigs.

In 2003, Castle was injured during a training exercise in Heidelberg in which he suffered three herniated discs and two cracked vertebrae, leaving the career-hopeful Army soldier a paraplegic. While a lengthy prosthetics surgery enabled him to walk again and return to private sector police work, the weight of his duty belt over time caused further damage to his spinal cord. Not only was a second surgery unsuccessful, Castle learned while undergoing treatment at the VA medical center in Birmingham, Alabama, that he had a life-threatening allergy to all pain medications and muscle relaxers, a complication that nearly took his life and forced him to resort to natural methods of pain management.

In 2012, Castle embraced the healing power of adaptive sports. He began training six days per week became a team member for the University of Alabama’s men’s wheelchair basketball team. Castle went on to play professional wheelchair basketball in Lyon, France, and is a Paralympic hopeful for the 2020 Games in Tokyo, Japan.

In 2016, Castle pioneered the construction of an arena dedicated solely to wheelchair basketball at the University of Alabama.  He was later honored by the college for an award recognizing his contributions to veterans, adapted athletes and the disabled student body on campus.

Castle is a disability advocate and seasoned media professional. He has appeared in numerous radio and television spots, and appeared at public events throughout the nation.

Castle and his wife Stephanie have recently relocated from Alabama to Alexandria, VA.