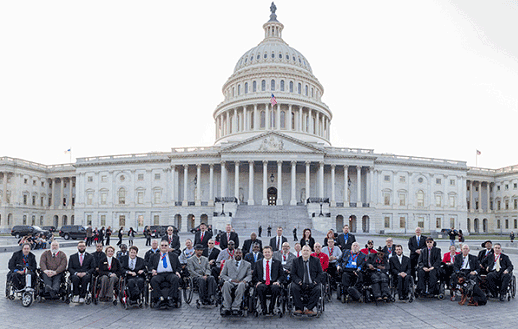 WASHINGTON, DC —  As the Americans with Disabilities Act (ADA) reaches its 28th anniversary today, July 26th, Paralyzed Veterans of America (PVA) is celebrating this landmark legislation while urging to protect against efforts to decrease the rights of all individuals with disabilities under the ADA.

“In 1990, Paralyzed Veterans of America helped lead the charge for passage of the ADA to prohibit discrimination and to ensure comprehensive civil rights were guaranteed for all people with disabilities,” said Heather Ansley, acting associate executive director of government relations for PVA. Since the ADA was enacted into law, we have been fighting against proposed measures that would weaken the legislation. Protecting the ADA remains a key priority for our organization in all sessions of Congress.”

The latest attack on the ADA has come from businesses seeking to add a notification requirement to the law. The ADA Education and Reform Act (H.R. 620), which was passed by the House earlier this year, would restrict the ability of a person with a disability to enforce his or her right to access public accommodations, such as restaurants, hotels, and grocery stores. It would also require people with disabilities to go through several procedural barriers before they can file a lawsuit to protect their rights.

Since H.R. 620 was introduced, PVA has helped to coordinate disability community advocacy efforts on Capitol Hill to educate members of Congress and their staffs about the harms of the legislation, and we have worked closely with key Senate and House leaders to push back against this bill. PVA’s actions, along with the broader disability community, have sent a strong message to the Hill that this bill must die in the Senate.

“PVA will continue to advocate to make sure that the required protections under the ADA are not taken away from our members and people with disabilities,” said Ansley.