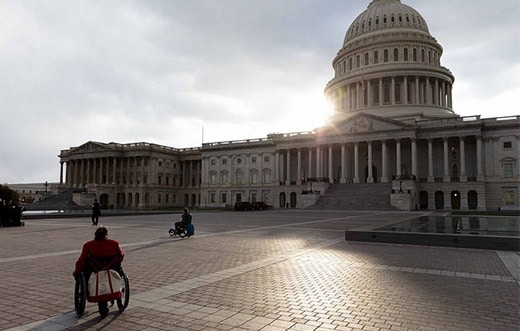 WASHINGTON, DC— 3/19/18 Paralyzed Veterans of America (Paralyzed Veterans) released the following statement today from its Executive Director, Carl Blake, in response to the impending release of the Omnibus spending bill later this evening:

“Paralyzed Veterans of America strongly supports efforts to include our top veterans’ priorities in the Omnibus spending bill. Expansion of the Department of Veterans Affairs (VA) Comprehensive Caregiver Program is critical for our members and was a main focus of their efforts on Capitol Hill earlier this month. There is no reason to deny this benefit to catastrophically disabled pre-9/11 veterans with service-connected injuries.

We have also advocated for reform of the VA’s Choice Program for community care in a way that protects the specialized services that our members depend on. Although we do not have a position on the broader Omnibus at this time, we greatly appreciate the efforts of House Veterans’ Affairs Committee Chairman Phil Roe (R-TN) to include the Senate compromise language supported by Senate Veterans’ Affairs Committee Chairman Johnny Isakson (R-GA) and Ranking Member Jon Tester (D-MT) in the Omnibus.

We strongly urge all members of Congress, including House and Senate leaders, to support these provisions. As Paralyzed Veterans’ National President David Zurfluh testified to in a joint hearing before the House and Senate Veterans’ Affairs Committees on March 6, “our members and thousands of other veterans will hold you accountable if you fail to do what everyone in this room and people around this country know is right.”