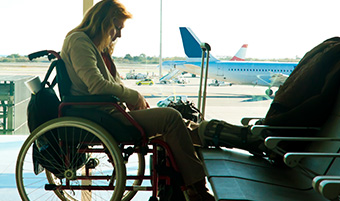 WASHINGTON, DC — 5/2/18 Paralyzed Veterans of America (Paralyzed Veterans) issued the following statement today in response to an overwhelming vote in the U.S. House of Representatives that passed the FAA Reauthorization Act of 2018 (H.R. 4). The bill, if passed into law, includes provisions that would make much needed reforms to air travel concerns for passengers with disabilities.

“The number one complaint that we receive from our members about any issue, even more than complications in accessing VA health care, is about the problems they consistently experience in air travel,” said Carl Blake, a service-disabled Army veteran and executive director of Paralyzed Veterans. “The message this bipartisan vote sends is that difficulties travelers with disabilities encounter in air travel are finally being recognized as an urgent need to be addressed in America.”

H.R. 4, as amended, includes several provisions that are similar to those found in the Air Carrier Access Amendments Act (H.R. 5004) introduced by Rep. Jim Langevin (D-RI) earlier this year. Some of the Paralyzed Veterans’ supported provisions in H.R. 4 include the development of an airline passengers with disabilities bill of rights and increased civil penalties for harm to passengers with disabilities or their wheelchairs.

The Senate’s FAA reauthorization legislation is still pending and will likely come to the floor later in May or June. As passed out of Committee last June, the FAA Reauthorization Act of 2017 (S. 1405) would require a study concerning airport accessibility, a determination on the feasibility of using in cabin wheelchair restraint systems, and the creation of an advisory committee on the air travel needs of passengers with disabilities to advise the Secretary of Transportation on implementation of the ACAA. The current FAA authorization expires at the end of September.

“Paralyzed Veterans will continue to support efforts to prohibit discrimination based on disability in air travel. We now call on the U.S. Senate to take up its FAA bill so that the air travel needs of people with disabilities will be addressed in this Congress,” said Blake.