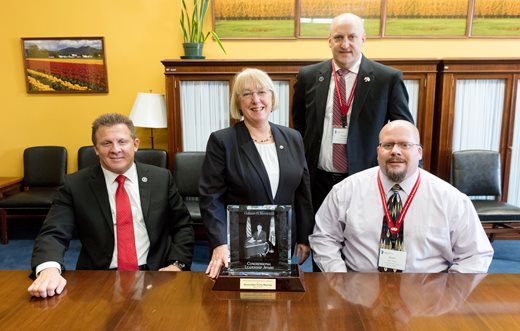 WASHINGTON, DC 3/15/17 – Paralyzed Veterans of America (Paralyzed Veterans) today announced it has honored Senator Patty Murray with the 2017 Gordon H. Mansfield Congressional Leadership Award. Senator Murray has collaborated extensively with Paralyzed Veterans government relations staff to advance legislation that enables VA to provide fertility counseling and treatment to qualifying veterans and their spouses, including in vitro fertilization (IVF). These long-awaited procreative services finally became available to veterans on January 19 of this year, and are approved through September 30, 2018.

“We’re honored to present Senator Murray with this award. Her work to advocate on behalf of America’s veterans and enable them to have families of their own post-injury is an immeasurable win for Paralyzed Veterans of America members,” said National President Al Kovach Jr. “We applaud Senator Murray for her tireless efforts on their behalf, and for remaining a leader in the effort to make this a permanent part of VA healthcare services.”

The Gordon H. Mansfield Congressional Leadership Award is named for the Honorable Gordon Mansfield, former Acting Secretary of the Department of Veterans Affairs (VA) and Executive Director of Paralyzed Veterans. The award reflects upon his services as the former Assistant Secretary for Congressional and Legislative Affairs at the VA, and Paralyzed Veterans’ first associate executive director of government relations. The late Mr. Mansfield was a combat-injured Vietnam veteran who was awarded the Distinguished Service Cross.

Senator Murray was notified of the award earlier this year, and presented with it last week at a private meeting during Paralyzed Veterans of America’s annual Advocacy Week.  The Senator issued the following statement of recognition: “Military families sacrifice so much on our behalf, and they deserve to know their country will be there for them, no matter what. Making sure veterans and their spouses have access to reproductive assistance is just one way we can fulfill that promise, and I couldn’t be more proud to have Paralyzed Veterans of America by my side as we work together to make sure we are doing everything we can for the men and women who sacrifice so much in their service to our country.”

Paralyzed Veterans of America is the only congressionally chartered veterans service organization dedicated solely for the benefit and representation of veterans with spinal cord injury or disease. For 70 years, we have ensured that veterans have received the benefits earned through their service to our nation; monitored their care in VA spinal cord injury units; and funded research and education in the search for a cure and improved care for individuals with paralysis.

As a partner for life, Paralyzed Veterans also develops training and career services, works to ensure accessibility in public buildings and spaces, provides health and rehabilitation opportunities through sports and recreation and advocates for veterans and all people with disabilities. With more than 70 offices and 34 chapters, Paralyzed Veterans serves veterans, their families and their caregivers in all 50 states, the District of Columbia and Puerto Rico. (pva.org)