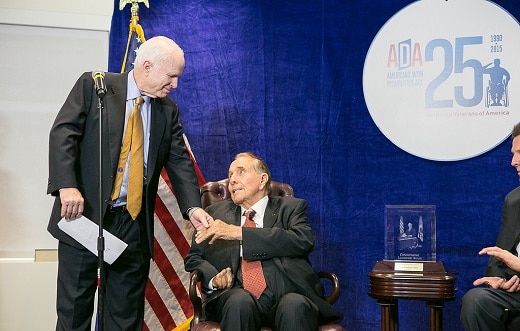 “Paralyzed Veterans of America is deeply saddened by the loss of Senator John McCain and we offer our sincere condolences to his family during this time.

Senator McCain’s leadership and influence in shaping veterans policy will truly be missed. He will be remembered as a key leader in reforming the Department of Veterans Affairs (VA) in recent years, ensuring that veterans have timely access to health care, and for leading the way to expand and improve mental health services provided by VA in an effort to curb veteran suicide.

Senator McCain was also a staunch champion for the rights of people with disabilities. He was a principal co-sponsor of the Americans with Disabilities Act (ADA) and the ADA Amendments Act, and fought courageously for ratification of the Convention on the Rights of Persons with Disabilities (CRPD), even against members of his own party. Regarding his support for the treaty, McCain stated, “As a cosponsor of the Americans with Disabilities Act and the ADA Amendments Act, I have long advocated on behalf of equal access and non-discrimination for all Americans, including our veterans and today’s disabled soldiers returning home from serving their nation in war. I support U.S. ratification of the disability treaty, as it seeks to advance these same fundamental values of equality and human dignity around the world.” His actions truly echoed his words.

In 2015, PVA had the pleasure of having Senator McCain join us at our headquarters as we celebrated the 25th anniversary of the ADA, and honored his friend and colleague Senator Bob Dole, also a key supporter of the CRPD.

We are forever grateful for Senator McCain’s support for veterans and people with disabilities. A decorated war hero, disabled Navy veteran, and public servant, we mourn his loss today and honor him for his lifetime commitment to serving this country.”