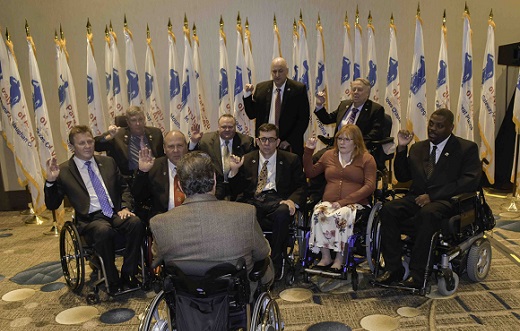 “I joined Paralyzed Veterans of America the same year I was injured,” said Zurfluh. “As I lay in my hospital bed after my injury, lost, broken and wondering about my future, Paralyzed Veterans of America came to my aid, gave me hope and showed me a path to succeed in life. I am honored to lead the organization and be the voice for its members and supporters for another year.”

Zurfluh is a U.S. Air Force veteran who served his country in Operation Desert Shield/Storm before being injured in a motor vehicle accident in 1995 while on active duty in Hachinohe, Japan. Following one year of inpatient rehabilitation and two years of outpatient care, he resumed life as an incomplete quadriplegic.

Since the organization’s founding more than 70 years ago, generations of Paralyzed Veterans of America’s leaders have worked to improve the quality of life for veterans and all people living with spinal cord injury and/or disease.