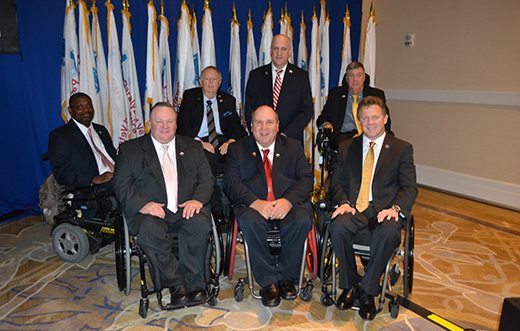 David Zurfluh, a native of Washington State, has served as Paralyzed Veterans’ senior vice president since 2015. Zurfluh is a U.S. Air Force veteran who served his country in Operation Desert Shield/Storm before being injured in a motor vehicle accident in 1995 while on active duty in Hachinohe, Japan. Following one year of inpatient rehabilitation and two years of outpatient care, he resumed life as an incomplete quadriplegic.

“I joined Paralyzed Veterans of America the same year I was injured,” said Zurfluh. “As I lay in my hospital bed after my injury, lost, broken and wondering about my future, Paralyzed Veterans came to my aid, gave me hope and showed me a path to succeed in life. I can’t imagine any better way to pay it forward than to lead an organization that offers new lives to injured veterans.”

Zurfluh has held several positions in the Paralyzed Veterans Northwest Chapter in Washington since 2003, including legislative director, vice president, president and as a member of the sports committee. He also serves on the Veterans Legislative Coalition in Olympia, WA, and is the co-chair of the West Slope Neighborhood Coalition.

“With the increased scrutiny of the VA by government leaders and speculation about Veterans Choice Care, we are at a turning point in history for veterans healthcare. I am honored to have the opportunity to be the voice of Paralyzed Veterans’ members and those who support our organization, as we take the lead and ensure our members will continue to receive quality health care in VA specialized services,” concluded Zurfluh.