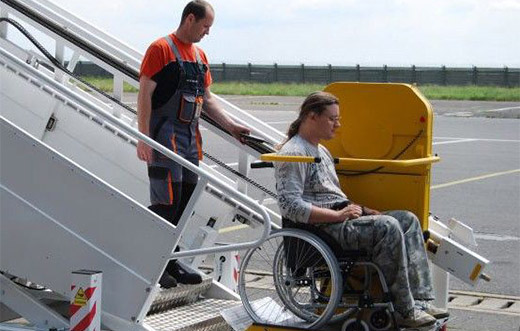 WASHINGTON, DC 8/1/17 — Paralyzed Veterans of America (Paralyzed Veterans) today filed suit against the U.S. Department of Transportation (DOT) for abruptly rolling back a rule intended to make airline travel safer and easier for passengers with disabilities. The rule, which requires domestic airlines to track and report data on lost and damaged wheelchairs and scooters, was delayed by the Administration without seeking input from people with disabilities.

“Too often, Paralyzed Veterans of America hears reports on how disabled veterans are reluctant to board planes, fearing their wheelchairs will be damaged or get lost during transport,” said Paralyzed Veterans of America National President David Zurfluh. “Wheelchairs are not a luxury. It’s just like having your legs end up in one city when you land in another, if you can imagine that. Wheelchairs replace functionality and provide independence. Having your only means of leaving the plane get lost or damaged is demoralizing. It is a significant issue for all travelers with mobility limitations, and one Paralyzed Veterans of America will not relent on until it’s fixed. Persons with disabilities don’t pay lesser costs for travel, so their experience should be as dignified and as comfortable as everyone else’s. This is especially true for those whose missing limbs and paralysis were the result of military service.”

DOT originally published the rule in November 2016, following a five-year rulemaking process that included input from air travelers, consumer and disability advocacy groups, and airlines. The rule was scheduled for implementation in January 2018.  In March 2017, DOT abruptly delayed the rule’s implementation date by one year, until January 2019, without providing the public any notice or opportunity to comment, in violation of the Administrative Procedure Act. DOT claimed the delay was necessary due to implementation “challenges” faced by the airline industry. However, the only evidence of these challenges DOT presented was a single email the agency received from the airline industry.

Since DOT’s decision, Paralyzed Veterans of America has informed Administration officials and members of Congress about how the rule’s delay will hurt people with disabilities and asked that DOT allow these critical protections to move forward.

Together with the complaint, Paralyzed Veterans of America filed a motion to reinstate the rule’s original effective date.