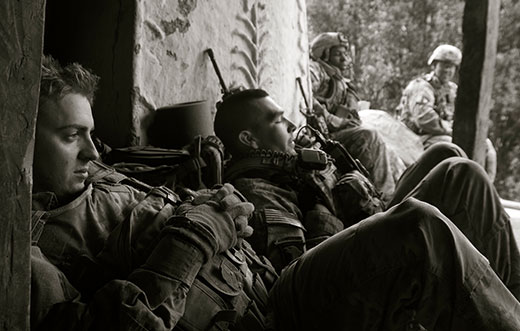 NO GREATER LOVE, A Film Directed by an Active Duty Soldier

Army Chaplain Justin Roberts took a camera with him when he deployed to Afghanistan. What he documents on film is a testament to the courage, bravery and valor of the soldiers in his battalion. No Greater Love seeks to help others understand the experience of war and the personal struggles that soldiers endure, both on the battlefield and once they return home.

Watch the Movie on Veterans Day at a Theater Near You
No Greater Love, a new military documentary, opens Nov. 10 in select theaters nationwide. The film strives to create a dialogue about war and promote healing through actual battlefield footage from Afghanistan and personal stories and interviews from soldiers and Gold Star family members who lived it.

Find Support & Get Help with PVA

For veterans like Tim Low – who served in the No Slack battalion with the movie’s director – returning home with a Traumatic Brain Injury (TBI), a Spinal Cord Injury or Post Traumatic Stress Disorder (PTSD), can be the start of a debilitating spiral downward. Paralyzed Veterans is uniquely positioned to help them, as well as their family and caregivers, to find the support and help they need.

An Inside Look: Tim Low’s Story and Struggle with TBI

While on patrol near the Pakistan border, a 14 year-old girl approached Tim Low and detonated the explosives she wore beneath her brightly colored burka. He still remembers her vividly. It’s like time slowed to a crawl.

The next seven years, as Tim describes them, were “dark days.” He struggled with his traumatic brain injury (TBI) and severe depression. Finally, a staffer at the Department of Veterans Affairs said “Go see Paralyzed Veterans of America. They’ll take care of you.” Not only did Paralyzed Veterans help Tim get the resources he desperately needed, they helped Tim’s father, a Vietnam veteran, finally get his claim approved as well.

At Paralyzed Veterans of America, we believe that love and support for paralyzed veterans – and all veterans – should be followed up with action. We advocate for benefits and resources. We provide rehabilitation services with the goal of independence. And we deliver systems of support to foster pride and dignity for everyone who has served.

Your donation to Paralyzed Veterans of America today will help more veterans like Tim receive the support they need to heal and rebuild their lives.