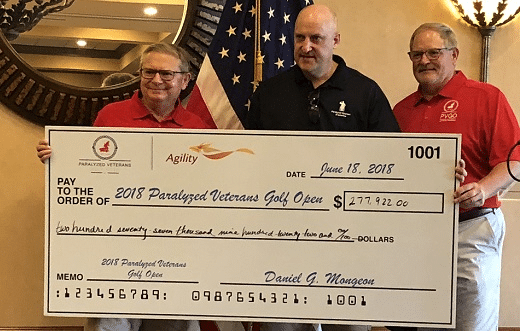 WASHINGTON, DC—Paralyzed veterans, their caregivers and families, business leaders, military and government officials took to the fairways today at The Golf Club at Lansdowne to raise funds for Paralyzed Veterans of America’s Paving Access for Veterans Employment (PAVE) program.

“Veterans with disabilities face many challenges finding civilian employment, which is why Paralyzed Veterans of America is proud to offer our PAVE program,” said David Zurfluh, a disabled Air Force veteran, and national president of Paralyzed Veterans of America. “Thanks to Agility and many other supporters of this annual golf tournament, we’ve been able to help veterans, their spouses and caregivers find meaningful careers for the last 11 years.”

Since its inception in 2007, the PVGO has raised more than $4 million and dedicated 100% of those funds to Paralyzed Veterans of America’s PAVE program, which provides free, vocational counseling and job placement assistance to any veteran, active duty service member, spouse or caregiver across the country. More than 5,000 veterans and military caregivers have been positively impacted through the PAVE program’s personalized training and assistance.

“Every year, the golf tournament attracts a large crowd who are dedicated to helping PAVE, and that has impacted the lives of many veterans, their caregivers and families,” said Rich Brooks, president of Agility Defense & Government Services, LLC and a retired Army colonel. “We are always glad to support the PAVE program because it provides more assistance and case work than most other programs are able to offer.”

Veterans who have worked with PAVE counselors and attended today’s event included:

Russell T. Bridges
Russell is an Army National Guard veteran and currently resides in Louisville, KY with his wife and three children. While deployed in 2004, he was injured at the age of 23 and subsequently out of the workforce for thirteen years. Russell became a member of Paralyzed Veterans of America and worked with the PAVE program, where his Vocational Rehabilitation Counselor helped guide him through the process of becoming a National Service Officer for Paralyzed Veterans of America.

Rita Vanhavermaet
Rita is a 36 year old Marine veteran radio operator and a single mother of two. She became a PAVE client by referral from the Minneapolis VA’s Transition Unit. Rita’s first position through PAVE was a transition job with a bakery. Rita then received a job working part-time at Xceed Company and was promoted to a full-time engineer position with the company.

During the PVGO Awards Program held in the evening, the Phil Halcomb Memorial “Patriot Award” was given in honor of the late Phil Halcomb. Phil, a double amputee, dedicated the last four years of his life supporting Paralyzed Veterans of America and was instrumental in raising over $320,000 in support of the PAVE program. This year’s Patriot Award was given to Dale Cottongim, President of SNTC, for his untiring efforts supporting the PVGO and PAVE.

To learn more about the PAVE program, visit www.pva.org/veterans-employment.

**Pictures from this year’s event will be available at: https://www.flickr.com/photos/paralyzedveterans/albums