U.S. Marine Corps Veteran
A military career was something Redzuan Razak had thought about since childhood but never thought possible as a Malaysian.
Share This Article

A military career was something Redzuan Razak had thought about since childhood but never thought possible as a Malaysian. It wasn’t until he was 16, when he went to the U.S. Embassy to apply for a student visa, that Razak learned he was a United States citizen. So it wasn’t an overwhelming sense of patriotism that pushed Razak to join the United States Marine Corps, it was, as Razak says, “what I wanted to do as a job.” However, after some time Razak says that he “started feeling more of like a duty to keep my friends and family safe [in the U.S.].”

“I PRETTY MUCH ACCEPTED IT.”

Having served two tours of duty as a Rifleman in the Marine Corps, Razak was readying for his third deployment when he was involved in a car accident, resulting in a T11/T12 complete spinal-cord injury. 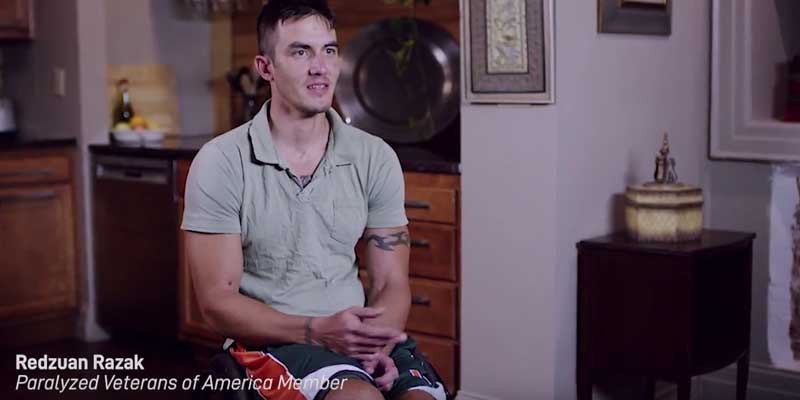 Razak says that he handled the extent of his injuries well at the time, saying he was more upset in those moments that he was going to miss his third deployment. Still in a daze, just days after the accident, Razak says, “I could have sworn I heard the doctor say I could walk again. So I asked if I could be back by January and he said, ‘Well, you’ve got a one percent chance of walking again.’”

Razak attributes part of his ability to cope well in the aftermath of his accident to Paralyzed Veterans of America mentors who took him under their wings and got him involved in adaptive sports.

Razak says that the Paralyzed Veterans provided invaluable help with the paperwork associated with his military discharge and application for VA benefits, but they also helped him through additional life hurdles. Razak says that members, serving as mentors, got him involved in activities and outings, outside of the hospital: “I just kind of hung out and I got involved in just about anything that they threw at me.”

Razak approaches life with zeal, whether it was trying new courses in college, taking on a new adaptive sport, or just getting involved in all of the opportunities Paralyzed Veterans of America offers. In fact, Razak’s “go for it” attitude drove him to start his own real estate investment business.

Three months of rehab in the San Diego VA hospital paired with mentorship from other paralyzed veterans are what Razak attributes his quality of life to today: “They really pushed me to learn all the skills that I needed to learn, and I was willing to learn it. And it made me very independent. I think that’s probably why I’m able to live the life that I live.”

Razak plans to continue his advocacy for Paralyzed Veterans of America, sharing the work that the organization does, not just for disabled veterans but all Americans with disabilities.