“Getting involved with PVA offered support for me as a veteran and for my family. They were instrumental in reassuring me and my family that though there has been a traumatic event, a full, valuable life is available to me, to the degree that I chose to go after it.”
– Tammy Jones 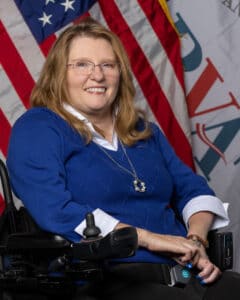 “Getting involved with PVA offered support for me as a Veteran and for my family. They were instrumental in reassuring me and my family that though there has been a traumatic event, a full, valuable life is available to me, to the degree that I choose to go after it.”

Tammy Jones’ dad was in the Army throughout her early childhood, and the patriotism and service to others he instilled had a big impact on her. During high school, Jones enjoyed participating in both the Army and Navy Junior Reserve Officer Training Corps. After graduating in December 1985, she decided to enlist in the U.S. Air Force.

While on active duty in the Air Force, at the age of 19, Jones had a motor vehicle accident when she was stationed in England as a maintenance scheduler for F-111 aircraft. This resulted in a complete spinal cord injury, leaving her a quadriplegic.

In 1986, during her initial rehabilitation at Stoke Mandeville Hospital Spinal Injuries Center, a social worker told Jones and her family to look into Paralyzed Veterans of America when they returned to the U.S. A few months later, after arriving at James A. Haley VA Medical Center in Tampa, FL, Jones met a gentleman from PVA who was there to help her. For Jones, that was the beginning of a wonderful relationship with the organization.

Jones is a strong advocate for female Veterans and serves on its Anita Bloom Women Veterans Health Committee, named for a paralyzed woman Veteran. She is an instrumental part of PVA’s Women’s Empowerment Retreat and Webinar Series, and advocates on Capitol Hill to highlight the unique healthcare needs of women Veterans with spinal cord injuries and diseases. She also proudly represents PVA on the VA Prosthetics Women Veterans Emphasis Work Group.

Jones wants people to be aware of the impact that PVA’s collaboration with Yale University’s Center for Neuroscience and Regeneration, and the University of Pittsburgh’s Human Engineering Research Laboratories, has had on research advances to benefit the lives of individuals with spinal cord injuries and disorders.

Jones was re-elected national Vice President of PVA in May 2022 during the organization’s 76th Annual Convention, to begin a new, one-year term on July 1, 2022. One of the most important things she has learned from serving on PVA’s Executive Committee is that “there are many talented and valuable PVA members, both male and female, who can help us continue to move PVA forward.”

Married since 1999, Jones and her husband, Dale, enjoy riding on their motorcycle and making the most out of each day. Jones’ hobbies include NASCAR, hunting, music, and adaptive sports.