“I became the Deputy Executive Director for Paralyzed Veterans of America because I wanted to give back to the organization and people that saved my life.”
– Shaun Castle 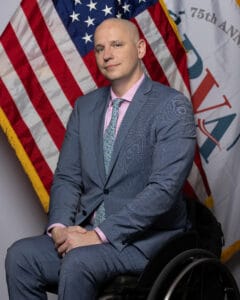 Castle enlisted in the U.S. Army in 2000 and became a military police officer stationed in Heidelberg, Germany. He served in Kosovo, Macedonia in support of the Global War on Terrorism.

In 2003, Castle was severely injured during a training exercise in Heidelberg. While a prosthetics surgery enabled him to walk again, he sustained further damage to his spinal cord. After a second spinal cord surgery that was unsuccessful, Castle learned during treatment at the Birmingham VA Medical Center in Alabama that he had a life-threatening allergy to all pain medications and muscle relaxers, a complication that nearly took his life.

In 2012, during his rehabilitation, Castle became familiar with the Lakeshore Foundation, a rehab hospital and Olympic training center in Birmingham, AL. He immediately developed a passion for adaptive sports and playing Wheelchair Basketball.

In 2014, Castle enrolled at the University of Alabama. He worked with the University on ADA Compliance and sat on the Diversity Committee as a representative for students with disabilities and veterans. He was also an adaptive sports athlete who played wheelchair basketball. During his time at Alabama, he helped secure funding to build the first-of-its-kind wheelchair basketball arena on campus.

Shaun has given numerous speeches across the country on ADA compliance, disability rights and veterans’ issues, and corporate social responsibility, and was appointed to the Secretary of Veterans Affairs’ Committee on Prosthetics and Special Disabilities. He has frequently testified before Congress on securing the long-term viability of Social Security for all people with disabilities, as well as spoken before the Department of Transportation on Air Carrier Access legislation and implementation.

Castle met the love of his life, Stephanie, in 2009. Since then, she has been his biggest champion. Stephanie is not only Castle’s wife, but is also his caregiver and provides physical and emotional support every day.