“PVA and the Kentucky-Indiana Chapter (KIPVA) have both changed my life in many ways. They have shown me that there is plenty life after my injury with adaptive opportunities, and also allowed me to be a voice for others.”
– Marcus Murray 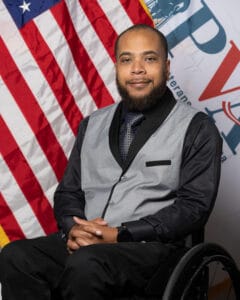 “PVA and the Kentucky-Indiana Chapter (KIPVA) have both changed my life in many ways. They have shown me that there is plenty of life after my injury with adaptive opportunities, and also allowed me to be a voice for others.”

Marcus Murray’s father is a retired U.S. Army veteran, and his mother has been a nurse for over 35 years. He grew up throughout the United States, having spent the most time in Indianapolis. After completing four years of Air Force Junior Reserve Officers’ Training Corps in high school, Murray knew that a military career was a great fit for him.

Murray served at Lackland Air Force Base in San Antonio, and Misawa Air Base in Japan specializing in Transportation-Traffic Management. In October 2012, Murray was randomly shot in a parking lot after attending the Circle City Classic and a family birthday in Indianapolis. A bullet entered Murray’s right shoulder and ricocheted through his chest, severing his T-6/7 nerve and paralyzing him from the chest down.

With the expert care from the medical staff at Indiana University Health in Indianapolis and the support of family and friends, Murray transferred to the Edward Hines, Jr. VA Spinal Cord Injury unit in Chicago, a month after his injury. PVA’s National Service Officer at Hines connected with Murray during his month of rehabilitation, and he was able to learn about PVA for the first time. When he returned home following rehabilitation, Murray reached out to the Kentucky-Indiana Chapter of PVA.

“PVA helped me after my injury by showing me opportunities still readily available for those with disabilities,” Murray said. “They also showed me how I can not only still serve others, but challenge myself as well.”

In 2013, Murray became a PVA member, and began getting involved in adaptive sports and government relations.  In 2015, he began serving on the Chapter Board of Directors as Secretary, and interim National Director when necessary, as well as a patient advocate as a member of PVA’s Field Advisory Committee. In 2018, he resigned from the Chapter Board of Directors to become the office manager of the Kentucky-Indiana Chapter of PVA for nine months, as the chapter transitioned through leadership changes.

Murray currently lives in Irving, Texas and is a proud father to his sons and grandfather to his now 6-year-old grandson.  In addition to sports, his hobbies include traveling, music, and learning about new technologies and adaptive ideas. He also enjoys working on his maternal and paternal family tree, learning photography and writing an inspirational book.