“The medical care and treatment that I received once I was transferred to the SCI unit at Wood VA Hospital was a direct result of the education and advocating done by PVA.”
– Ken Ness 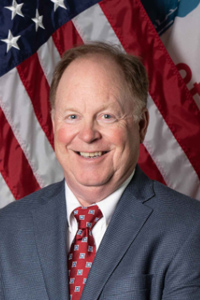 Ken Ness is from Minnesota and was a cadet in the U.S. Air Force. While attending the U.S. Air Force Academy in 1974, he fractured his neck in a wrestling accident, initially completely paralyzed from the neck down.

Ness was first treated in Denver, where his accident occurred, and then transferred to Wood VA Hospital (now known as Clement J. Zablocki VA Medical Center). He had an operation that was successful in fusing his cervical spine, however, Ness was rendered totally paralyzed again. Luckily, sensation and function slowly came back. Ness was told he was perhaps the only person ever to have been entirely paralyzed twice and experience such a great recovery.

For over forty years, Ness has been assisting individuals as an employee of U.S. senators, as an attorney both in government and private practice and in his work for the Wisconsin Chapter.

The medical care and treatment that I received once I was transferred to the SCI unit at Wood VA Hospital was a direct result of the education and advocating done by PVA.

Ness was first elected as national vice president in 2019. He was re-elected during PVA’s 74th Annual Convention, held virtually in May 2020, to begin a new, one-year term on July 1, 2020. He wanted to be on the Executive Committee “in order to assist in meeting the upcoming challenges in whatever manner [he could] and in helping make the decisions that will need to be made in the very near future.”
The services and programs that PVA provides are not only for paralyzed veterans, and Ness wants the public to know that.

“Some of the medical treatments championed by PVA are the ‘gold standards’ around the world for all SCI patient care, not just for veterans – the medical research that is funded by PVA is very broad-based and helps virtually all patients, not just paralyzed individuals,” Ness said. “Many of the PVA’s advocacy successes have benefitted and continue to benefit many others, including both veterans and the general public.”

Ness loves participating in many different adaptive sports including cycling and air rifles. He has three children and lives in Elm Grove, Wisconsin.