“The wonderful programs PVA made available for me enabled me to gain my independence physically.” – Josue Cordova 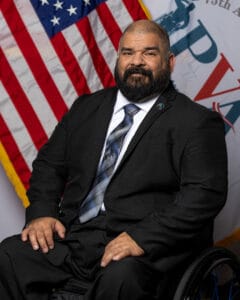 “The wonderful programs PVA made available enabled me to gain my independence physically.”

Josue Cordova is a motivator, leader, and proud U.S. Air Force Veteran. He enlisted at age 17, inspired by family members who served before him and especially his grandfather, a U.S. Army Veteran who served during WWII in the Pacific.

Cordova completed basic training at Lackland Air Force Base in San Antonio, Texas. He stayed there for tech school training and became certified as a 2T131 Vehicle/Operator Dispatcher Apprentice, where he drove and qualified on everything from vehicle sedans to 20-ton wreckers and semi tractor-trailers.

He was introduced to PVA shortly after a car accident that left him a T10-T12 complete paraplegic. A PVA national service officer rolled into his room and told him about all the incredible benefits and opportunities that were available to him and his family, despite the terrible accident. Cordova became a Vaughan Chapter member, and is grateful for the organization being there for him at that time when he was the sole caretaker of his daughter and autistic son.

“PVA was an incredible support to me, making sure my rights and benefits were taken care of even when I was a scared 24-year-old, divorced single dad raising a daughter and a severely autistic son,” Cordova says.

When the timing was right, Cordova began eagerly serving PVA first as a member of the Board of Directors, then subsequently as Vaughan Chapter President and National Director. He has participated in advocacy and legislation on behalf of the chapter, saying, “Lobbying for not only paralyzed Veterans but for the disabled community as a whole has become a passion for me. It is important for us to continue to have a voice on Capitol Hill.”

He has also been very active in wheelchair sports and other activities. He has attended many different National Veterans Wheelchair Games, has gone downhill skiing, and enjoys traveling softball, trapshooting, sporting clays, and Battle Buddy 3-gun shoots. He is also a passionate compound bow and shotgun hunter.

Cordova was re-elected national vice president of PVA in May 2022 during the organization’s 76th Annual Convention, to begin a new, one-year term on July 1, 2022. He is passionate about PVA’s mission and believes every member’s voice should be heard through active, thriving chapters.

“It is my intention to lead with service, with a nod and respect to our PVA forefathers who paved the way – but with our eyes on the future,” says Cordova.

Josue and his wife Veronica have been married since 2011, and together they have four adult children, three daughters, a son, and four grandchildren. They enjoy fishing, riding their Harley motorcycle, traveling, and spoiling their grandkids.