“PVA changed my life forever. PVA literally stays with you from initial injury to the grave, not only for the veteran but the spouse/caregiver, family and friends.”
– David Zurfluh 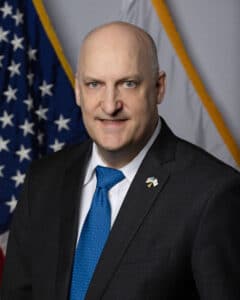 “PVA changed my life forever. PVA literally stays with you from initial injury to the grave, not only for the veteran but the spouse/caregiver, family and friends.”

David Zurfluh, PVA Northwest Chapter member, served as national president of Paralyzed Veterans of America from July 2017 until June 2021. With the re-election of Charles Brown as PVA’s national president in May 2022, Zurfluh will continue to serve as the organization’s immediate past president for a new one-year term beginning July 2022.

“PVA has given me so much throughout the years,” says Zurfluh. “I gave my heart and soul to this organization, and I will continue to do so. I welcome Charles as the new PVA president and I give him my full support.”

Early on, Zurfluh felt a duty to serve his country and follow in the footsteps of his grandfather (Navy), dad (Army), brother Tom (Air Force), and extended family who served in all military branches. When Zurfluh was in high school, he narrowed down the branches he wanted to serve in between the Marine Corps and the Air Force. His friend flipped a coin to determine his path — heads for Air Force and tails for the Marine Corps. The coin landed on heads, and Zurfluh’s path was set in motion.

A member of the U.S. Air Force from 1987 to 1995, Zurfluh served as a jet engine mechanic and a crew chief in Operation Desert Shield and Operation Desert Storm. While on active duty in April 1995, he was injured in a motor vehicle accident in Hachinohe, Japan, suffering a shattered left arm, broken left wrist and a broken neck. Zurfluh was diagnosed with incomplete quadriplegia.

After three weeks navigating through three hospitals, he wound up at the Seattle VA Medical Center.

Zurfluh was at his lowest point when two PVA National Service Officers came to his bedside and told him they would take care of him and do everything they could to make him as whole as possible. “PVA was there for me, they cared for me, and they gave me hope,” Zurfluh says. He became a member of PVA when this life-changing moment occurred, in 1995.

Zurfluh spent one year as an inpatient, and two years as an outpatient in the Seattle VA Spinal Cord Injury Unit. After finishing rehab, Zurfluh wanted to do all he could for the organization that gave him dignity and purpose again. He determined to make it his life’s mission to help veterans with spinal cord injury, disorders, and related diseases like MS and ALS.

A native of the state of Washington, Zurfluh started volunteering at the PVA Northwest Chapter, helping local members. He held chapter-level positions as legislative director, vice president, president, and member of the sports committee. Zurfluh realized that he could help even more PVA members by serving at the national level. In 2010, he was elected to the Executive Committee as national vice president, serving three consecutive terms. In May 2014, Zurfluh was elected as national senior vice president.

Zurfluh has served on the Veterans Legislative Coalition in Olympia, WA, and as co-chair of the West Slope Neighborhood Coalition in Tacoma, WA. In addition to his work on behalf of PVA in Washington, D.C., Zurfluh currently serves on the National Board of Advisors of the Museum of Aviation Foundation, volunteers at local food banks, and was a lector at Holy Rosary Church in Tacoma, WA. His hobbies include hand cycling, shooting sports (trap, handgun, and archery), golf and snow sport

Zurfluh travels extensively throughout the country advocating for and serving Paralyzed Veterans of America, and wants people to know that “we specialize in SCI/D veterans, but we serve all veterans; if a veteran needs help and comes through our doors or calls, we help them, their caregivers and their loved ones, period.”