“PVA came to my bedside and started helping me build a life print for the rest of my life.” – Charles Brown 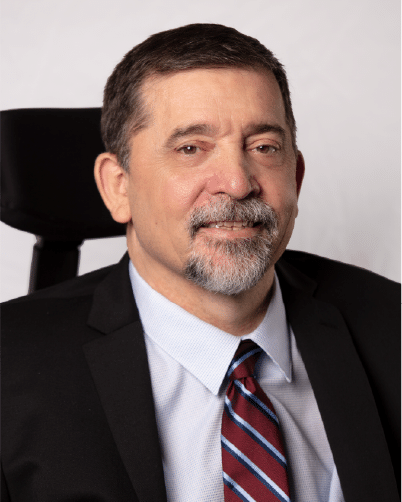 “PVA came to my bedside and started helping me build a life print for the rest of my life.” – Charles Brown

Charles Brown was re-elected PVA national president for his second term in May 2022, during the organization’s 76th Annual Convention, to begin a one-year term on July 1, 2022. He previously served as senior vice president for three years.

From a very young age, Brown knew he wanted to serve his nation and had a calling to work with military aircraft. He joined the U.S. Marine Corps in 1985 and was trained in aviation ordinance. In 1986, Brown sustained a spinal cord injury as a result of a diving accident while serving in Cherry Point, NC.

During his initial rehabilitation at the Department of Veterans Affairs’ Spinal Cord Injury center in Augusta, GA, he was introduced to PVA and became a member of the Southeastern Chapter.

“PVA helped me through the process of filing for benefits,” Brown says. “They gave me ideas for accessible bathrooms and entrances to my house. They have offered me sporting opportunities I never would have thought about.”

In 1987, he moved back to his native Missouri. Wanting to give back to the organization who had given so much to him, Brown served on the Gateway Chapter board in a multitude of capacities, including as Americans with Disabilities Act coordinator, advocacy director, treasurer, and vice president.

While in St. Louis, Brown helped establish the Rolling Rams quad rugby team. “I really enjoyed helping to build the team,” Brown remembers. He recalls recruiting players by making phone calls to rehab facilities, and even talking to people in wheelchairs at the mall. The team really took off when a couple of recreational therapists got involved and brought athletes with them. “It’s a blessing to know that you can get things done when you have the right people in the right positions,” he says.

Seeking a more wheelchair-friendly climate, Brown relocated and joined the Florida Chapter of PVA in 1999. In Florida, he served in a number of positions, including hospital committee chair, secretary, hospital liaison, national director, and president. Brown has also served on numerous national committees, including strategic planning, planned giving, and resolution.

Brown believes in helping his fellow Veterans improve their quality of life and is passionate about continuing to help PVA improve the accessibility of our nation.

He says, “PVA is in great hands, not because of me but because of the team that PVA is and has been for over 75 years. Together, we are all the face of PVA and we will continue to let everyone know that we count, that our voice matters, and that we deserve the same rights as everyone else.”

Currently on the USA Boccia team, Brown was selected team captain for the Parapan American Games in Guadalajara, Mexico. Ranked 63rd in the world after one international tournament, he fully believes that an active life has kept him healthy.