“PVA was by my side through every step of my rehabilitation process. PVA also gave me my first career opportunity after leaving the military.”
– Carl Blake 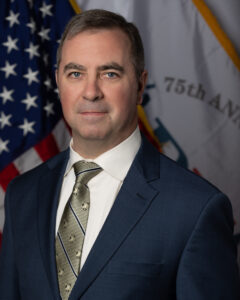 Carl Blake is the Executive Director for Paralyzed Veterans of America (PVA) at PVA’s National Office in Washington, D.C.  He was appointed Executive Director of PVA in January 2018. As Executive Director, he serves as the Chief Executive/Operating Officer of the organization. He is responsible for exercising administrative control of all offices and functions of PVA, as directed by the President. This includes overseeing all efforts devoted to financial management, development and fundraising, strategic communications, and service programs executed by PVA.

Carl previously served as the Associate Executive Director of Government Relations for PVA. He was responsible for the planning, coordination, and implementation of PVA’s National Legislative and Advocacy Program agendas with the United States Congress and federal departments and agencies. He has represented PVA to federal agencies including the Department of Veterans Affairs, Department of Defense, Department of Labor, Small Business Administration, Department of Transportation, Department of Justice, and the Office of Personnel Management. He has frequently testified before committees of the U.S. House of Representatives and Senate, and has been quoted on many occasions in print and online media outlets.

Carl has served PVA and its members for more than 20 years, dedicating his life to helping veterans and their families, particularly veterans with catastrophic disabilities like spinal cord injury or disorder. The most important thing he has learned in his role: “There are thousands of veterans with spinal cord injuries and disorders who rely on us to be their advocate when they otherwise do not have a voice. PVA supports these veterans so they have opportunities to live fulfilling, active lives in their communities.”

Carl was raised in Woodford, Virginia.  He attended the United States Military Academy at West Point, New York.  He received a Bachelor of Science Degree from West Point in May 1998.

Upon graduation from West Point, he was commissioned as a Second Lieutenant in the Infantry in the United States Army.  He was assigned to the 2nd Battalion, 504th Parachute Infantry Regiment (1st Brigade) of the 82nd Airborne Division at Fort Bragg, North Carolina.  He graduated from Infantry Officer Basic Course, U.S. Army Ranger School, U.S. Army Airborne School, and Air Assault School.  His awards include the Army Commendation Medal, Expert Infantryman’s Badge, and German Parachutist Badge.  Carl retired from the military in October 2000 due to injuries suffered during a parachute training exercise. He completed spinal cord injury rehabilitation at the Richmond VA Medical Center in Virginia. A PVA National Service Officer (NSO) was one of the first individuals he was introduced to at the Richmond VAMC, and that NSO helped him secure all of his veterans’ benefits and necessary health care.

Carl became a member of the Mid-Atlantic chapter of Paralyzed Veterans of America in 2000.

Carl received his Master’s in Public Administration from Old Dominion University with a concentration in Nonprofit Management.