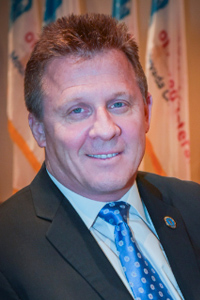 Al Kovach, Jr., of Coronado, CA, served as national president of Paralyzed Veterans of America from July 2014 until June 2017. With the re-election of David Zurfluh as PVA’s national president for the Executive Committee’s 2020 – 2021 term, Kovach will continue to serve as the organization’s Immediate Past President for a one-year term that began on July 1, 2020.

A member of the elite U.S. Navy SEALs, Kovach was paralyzed in a parachuting accident during a combat training exercise in 1991. Kovach has served at the highest levels of leadership within PVA since 2007. He began service to the organization in 1991, at the chapter level as government relations director for the Cal-Diego Chapter of PVA in San Diego, and has since served on its board of directors.

In his role as PVA national president, Kovach delivered testimony before the U.S. House and Senate Veterans Affairs’ Committees, was published monthly in Paraplegia News, and appeared regularly on local (CA) and national media to discuss key veterans’ issues.

A lifelong athlete and a proponent of adaptive sports, Kovach is a two-time winner of the LA Marathon, a participant of the Paralympic Games, and has completed a 3,700-mile transcontinental triathlon.

As a recognized leader in veterans advocacy, Kovach is a sought-after advisor for civic, community and corporate partners who share his commitment to improving the quality of life for veterans and all people living with spinal cord injury or disease.

A native of Philadelphia, Kovach attended Indiana University (1983-1987), and was a member of their legendary swim team before joining the Navy in 1988. He and his wife, Magaly, reside in Coronado, CA.