“In addition to helping me receive specialized VA healthcare and benefits, PVA has opened the door and shown me there is so much more to life than I ever thought was possible with a spinal cord injury.” – Michael Negrete 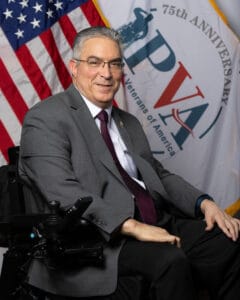 “In addition to helping me receive specialized VA healthcare and benefits, PVA has opened the door and shown me there is so much more to life than I ever thought was possible living with a spinal cord injury.”

Negrete was raised with a great respect for the Armed Forces, growing up in a family with a long history of military service. His grandfather was a retired Army Master Sergeant and two-time Purple Heart recipient who served in Europe during WWI and WWII, his father is a retired Air Force Senior Master Sergeant who served during the Vietnam War, his stepfather was an Army Sergeant stationed in Korea, and he also has many other extended family members who have served.

Negrete initially enlisted in the Marine Corps and subsequently in the Coast Guard, collectively serving ten years during the Cold War and Persian Gulf War eras.

In the Marine Corps, Negrete served as an 0351 Infantry Assaultman, as an SMAW Team Leader, and as a member of the Honor Guard and earned two meritorious promotions. While in the Coast Guard Negrete served as an Electronics Technician and performed an array of duties including maritime law enforcement with Mississippi’s “Blue Lightning Strike Force”, search and rescue, multi-national naval operations and electronic warfare operations aboard ship. He graduated from two interservice schools, the Navy Electronic Warfare School and the Air Force NCO Academy, where he also received the Academy’s Air Force Citizenship Award for exemplary professionalism and leadership.

In 2001, Negrete sustained a cervical spinal cord injury resulting in incomplete quadriplegia. He joined Paralyzed Veterans of America in 2008. PVA’s New England Chapter assisted Negrete with all of the necessary paperwork to enroll and start receiving care through the VA Health Care system. Negrete said, “I couldn’t be more thankful to have such a knowledgeable resource available to assist me with receiving the benefits I had earned.”

Negrete believes in simply making a positive difference in the lives of veterans with spinal cord injuries and disorders. He joined the PVA’s New England Chapter Board of Directors in 2015 and served as Chapter President from 2017-2022, National Director to PVA, Communications Director and Newsletter Editor. During his Presidency, the Chapter earned the John Price Most Improved Chapter Award, the Richard Fuller Award for Outstanding Achievement in Government Relations, the Bob Webb Excellence in Newsletter Award, and Outstanding Chapter Website. Negrete was also the 2021 recipient of PVA’s Dwain Taylor Award for Voluntary Service in recognition of his exceptional contributions.

He also served on PVA’s National Finance and Budget Committee, and was selected by former PVA President David Zurfluh to serve on a special Chapter Investigative Hearing Panel.

Negrete was re-elected as PVA National Vice President in May 2022 during the organization’s 76th Annual Convention, to begin a new, one-year term on July 1, 2022. Expanding the needs of special individual’s physical and mental wellbeing, including education about eligible benefits and resources available to them, is important to Negrete in continuing as Chair of the Spouse and Caregiver Committee.

When not volunteering or working, Negrete enjoys dining out with family and friends, going to concerts, attending Broadway shows in NYC, and traveling. He lives in Milford, NH with his wife Terry and their Jack Russell Terrier, “Storm.” He has a grown daughter, Ashley, who also lives in NH.