“Paralyzed Veterans of America has given me so much personally. I have been able to help other veterans through serving at PVA.”
– Hack Albertson 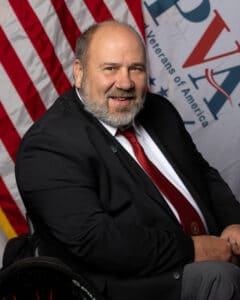 “Paralyzed Veterans of America has given me so much personally. I have been able to help other Veterans through serving at PVA.”

There was never any doubt in Hack Albertson’s mind that he would join the U.S. Marine Corps, since every generation of his family had proudly served in the military. His family friend William H. Myers was awarded the Navy Cross posthumously in Vietnam, and his award citation inspired Albertson to become a U.S. Marine.

A member of the U.S. Marine Corps from 1981 to 1985, Albertson served as a weather observer and assistant forecaster attached to Marine Aircraft Group 31 in Beaufort, SC. He sustained a T-7 complete spinal cord injury in 1994.

Although he was told he would never sit up on his own due to his injury, he worked at Kimball International in procurement for 19 years and went on to own and operate an Allstate Agency.  In 2008, Albertson signed up to participate in a government clinical trial online for a walking with functional electrical stimulation study at the Cleveland VA Medical Center. At the Cleveland VAMC, Albertson found out about PVA, the Veterans’ benefits that the organization could help him receive, and adaptive sports. It was a life-changing moment for Albertson, and he began working to help Veterans with PVA.

Albertson served on the Kentucky-Indiana Chapter of PVA’s Board of Directors for several years. He also held chapter positions as vice president, treasurer, hospital liaison officer, and national director.

Albertson has served PVA National as Chairman of the Awards and Spouses Committees, Vice President of the Admin and Resolution Committee, and Chairman of the Field Advisory Committee overseeing the VA Hospital Site visits. He is currently chair of PVA’s Multiple Sclerosis (MS) Committee.

He joined PVA because he loves helping newly injured Veterans find ways to make their lives better.  Albertson loves the outdoors and has many outdoor hobbies . Albertson wants the public to know that PVA’s programs “help all Veterans. We also impact their caregivers and children immensely. PVA is the loudest voice for the disabled community.”

Albertson has served on the board of directors of the local National Wild Turkey Federation Chapter and Lifewaters.org.  He is also a certified advanced scuba diver, and is a member of the Paralyzed and Disabled Scuba Diving Organization and the Wounded Veterans in Parks (WVIP) program.

On December 7, 2018, Albertson experienced a momentous day in his life when he took part in a dive at the USS Arizona Memorial at Pearl Harbor to finish testing several oil resistant materials for future research, as part of the Pearl Harbor WVIP program.  While there, he met members of the Eagles band. The Eagles played a tribute video to the Paralyzed Veterans diving in Pearl Harbor at their concert that night in Honolulu.

In addition to scuba diving, Albertson is a class II athlete and has earned 32 medals at eight National Veterans Wheelchair Games. He has received medals for trapshooting, softball, boccia ball, archery, swimming and billiards.

Albertson was re-elected National Vice President of PVA in May 2022 during the organization’s 76th Annual Convention, to begin a new, one-year term on July 1, 2022. This will be his 8th year serving on PVA’s Executive Committee.

Albertson and his wife, Jill, currently reside in Campbellsburg, IN, where he is a member of the local First Baptist Church. They have four children, two boys and two girls, all thriving college graduates. One daughter is a Navy Lieutenant, and her husband is a Navy Commander.